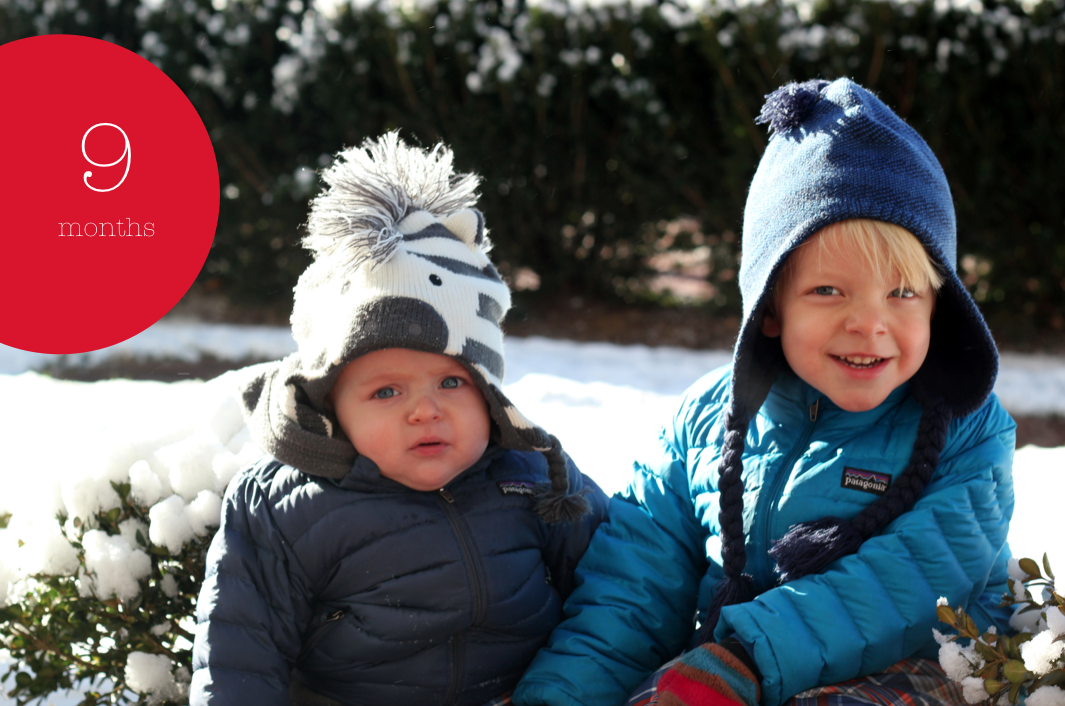 We got a bit of snow on January 3rd, so raced outside, all bundled up for a few candid moments. Hudson was quickly over it. He bundled back up and hung out in the stroller while Behr did a few snow angels and we had a silly snow ball fight. Hudson on the other hand maintained the above expression almost the whole time. Apparently he was not a fan of the wet cold snow.

Someone recently asked me if I thought Hudson would be louder than Behr and I said, "Yes, absolutely." To which our friend replied, "That's a scary thought!" Hudson has an ear piercing volume and a deep guttural grumble, the former of which sounds like a pterodactyl and surfaces primarily at feeding times. Not giving Hudson food fast enough? Not giving Hudson food he wants? Not meeting each of Hudson's appetite demands? The pterodactyl comes out. CLARIFICATION: we are not calling Hudson "pterodactyl" but he sure does sounds like one sometimes.

The sippy cup has been a new mastery this month and perfect timing. It buys us, his parents, a few moments to actual eat our own meals while he gulps down his water. Hudson is giving us a run for his money. So much so, we placed solid bets he would top 20 lbs at his 9 month check up. He does have a big head...so maybe that is where all the food is going? I now have a new appreciation for what it means to "feed boys."

Hudson has been expressing a new wide range of emotions, making faces with his eyes, his tongue, and teeth. His eyes are full of compassion, ferocity, and joy. I can look at Hudson and see emotion in his eyes. His tongue is constantly exploring new things, occasionally the side of your face if you aren't paying attention, but it hangs out as he works hard.

For a few weeks, Hudson has been reaching for our hands and pressing up into the standing position. It is shaky, but determined. And then, he went ahead and pulled up onto his play table on his own, looking around to see who was watching. He doesn't do it often, but he knows he can. However, like any good younger brother, he waits around for big brother to step in for the assist.

Consistently, Hudson's giggles boost our spirits and encourage our days. He is really, really funny.

Disclaimer: compensated affiliate links may be used in this post.
on 9.1.14