linking up to life lately with blair. 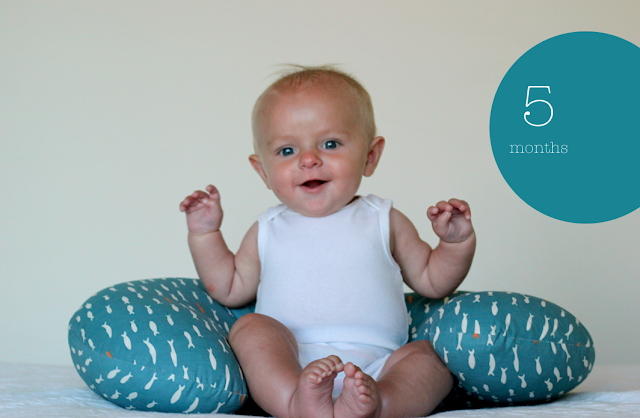 Hudson is getting so big and doing new things every day. He keeps sneaking up on us with new skills. He prefers to roll over to his right side and then lays there smiling, content to stay just as he is. Alternatively, he has no interest in tummy time or his left side. Go figure!

He also is sitting up like a champ these days. He can most often be found right along side us in his seat when we are cooking dinner, doing work at the table, or when Behr is playing trains. We have also discovered that Hudson sits up fairly well without the seat. Such a big boy! Do you see him above, that look of excitement? Curled toes and all, he loves sitting up. And then all the sudden, he makes a wildly jerky motion and lands nearly flat on his face, which he is not so much his favorite.

Hudson is a grasping machine. If you aren't careful, he is swiping your dinner fork, phone, train, and maybe even a piece of bread all squired away under his swaddle. I keep finding odd items that he has tucked in along side him with his stealthy grasp. This also makes playing with Hudson significantly more fun for Behr. The two sit and giggle as they pass toys back and forth to each other.

Over Labor Day, we gave Hudson his first bit of food, a wedge of cucumber. He loved holding it, bringing it up to his mouth, and drooling all over it until it was too slippery to hold on to any more. It was equally adorable and gross. We will hold off on really introducing food until October, but for now he gets something to gnaw on every once in a while.

Hudson has also crossed the line between laying happily in bed until he falls asleep into ear-piercing panic screams because he realizes someone put him down. HE watches me a hawk and has minor spaz-outs when I am not within arms reach.

Without even realizing it Behr has become a boy. The baby is all gone. He is skinny and getting taller, and doubling his independence nearly every day. He gets himself dressed, puts on his own shoes, and helps himself to snacks all day long. He also says the funniest things these days, often reminding me of thing I need to do like, "Mom, time to change Hudson's diaper," or "I can't go to school if I can't see!" (pulling down his hair over his eyes and asking for a hair cut.) Speaking of school, #littledays will be back on Thursday with Behr's first day of school pictures. I hope you can join us!
on 9.9.13