Life lately...linking up with Blair.

// I first started this post on August 2nd in anticipation of posting it for the following life lately. That clearly didn't happen.
// My goal this year was to take August off from blogging, and then I was having a lot of fun this summer and didn't want to miss recording August. Here we are in the later half of the month, I haven't posted since the first. I should have taken August off.
// We've been on two family vacations and I unexpectedly had my wisdom teeth removed. I really should have taken August off.
// But all of this time not blogging, I am ready to go for August Book Club next Tuesday (8/27). I loved reading Carry On, Warriors by Glennon. And I am even more excited for your feedback.
// Now, back to Hudson's update...clearly he is the second child. Sorry dude. 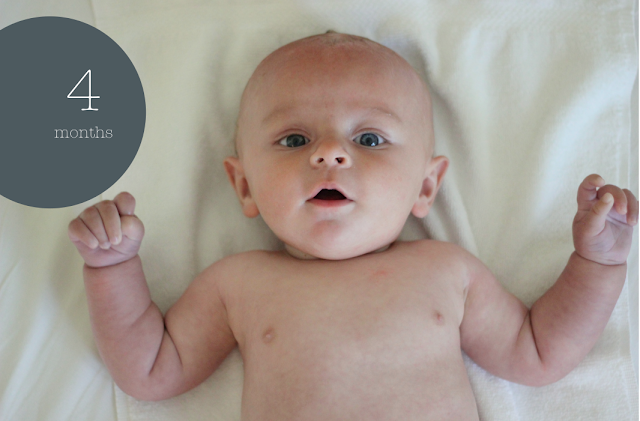 Hudson's 4 month check up was supposed to be when we were in Florida. Clearly we opted for vacation over the doctor's office and shots. So the details of his stats will just have to be updated in an untimely fashion at a later date. Regardless of when the appointment is, we know Hudson is packing on the pounds. He is also downing some major bottles!

This past month was a huge shift. I didn't realize or remember how in a few short weeks babies loose their infant pudge, develop a stronger core, and any resemblance of newborn disappears over night and you wake up wondering where the time has gone. Hudson, I will say this a thousand times, but baby, you are growing up way to fast!

Hudson is working hard at rolling over, he just isn't quite there yet. But at the rate he lifts his legs to his head, he might master the backward roll first. He tugs his pacifier in and out of his mouth, and waves it around just to get my attention some times. Once he does, the smile on his face could light an entire city. He is so expressive, it blows me away some days. I catch myself thinking, "Really, for me? That smile is for me?"

Along with his smile, Hudson keeps on giggling. He is contagiously happy most of the time.

Hudson is also teething. Not a single tooth has broken through the surface yet, but he spends most days trying to gnaw on something, and if all else fails, will chew his knuckles until they are bright cherry red. He has a constant stream of spit and drool streaming from his mouth and often surprises himself with an extra large spit bubble making a splash in his face.