How breastfeeding works for us.

We have made it! Nearly 7 months of breastfeeding, so we have reached the ubiquitous milestone of breastfeeding for the first 6 months. Behr was exclusively* breastfed for this time with two very minor exceptions, but I will go into those later. I am now facing the reality that working 30+ hours out of the home, pumping at least three times a day, and not having my baby so close, leaves me worried that my supply is waning and I won't make it until his first birthday let alone the recommended two years.

My worries aside, I have learned more than I ever could have imagined. They {although I don't quite remember who} say that a crazy high percentage of learning takes place from conception to age 5. Well over half of your learning. Since having Behr, I would now argue that for women, the next greatest time of learning in life is immediately after conceiving. Call it mother's instinct or my own obsessive compulsive nature, and perhaps heightened availability of information these days, but I have consumed more information on all sides of every issue in the past year and a half than I ever thought possible.

There is a lot of crap information. Many people address parenting issues with scare tactics. And the topic of breastfeeding, while coming back into vogue, is at the top of the list for heated debates. So I do not enter into this topic lightly, but with the caveat that every parent child relationship is different. As a mother, you need to fight for what is best for you and your baby. With that said, here is what worked for us, and a few pointers along the way.

If you want to venture into breastfeeding your baby, know that it takes serious dedication and support. Talk to your loved ones now and make sure that they will provide the encouragement you will no doubt need along the way. It was important for Mark to understand why this was so important to me. He was charged with the responsibility of getting Behr and I "together" for our first feeding as soon as possible.

Don't let the thought of a c-section or a possible nicu stay frighten you regarding breastfeeding. Behr and I did not have our first latch for nearly two hours after he was born. It is okay. He was in me for over 41 weeks, so we were still able to bond. I was terrified that all hope of breastfeeding would be ruined as they wheeled me down the hall after 50 hours of labor into a sterile operating room. I wish someone had assured me that the worry was not necessary.

Do you have a strong let-down? I was so engorged when my milk came in that I could not lower my arms. My dear friend Karlene and I still laugh today because I would lean forward and immediately leak through my nursing pads, padded bra, tee shirt, and sometimes even sweatshirt. Milk oozed out of me from seemingly every crevice. Then I found this wonderful invention: Milkies.

If you have a healthy production, check them out. This allowed me to nurse from one side each feeding, to ensure Behr got both the fore milk and the hind milk, without leaking through everything. It also gave me the bonus of capturing the precious leaking milk for my freezer supply.

Beginning to pump in the first few weeks also helped me become more comfortable. There is a balance between pumping to relieve your engorged boobs and having pumping over stimulate, leading to more discomfort. Start slowly and figure out what works for you. If you need help producing, pump mid-way between feedings to trigger your body to produce more milk.

If you are currently pregnant, buy nursing pads now. To see my favorites, check out my Gear Guide for Nursing. I began leaking at 20 weeks. The med students at the hospital were amazed as I let down during my epidural. So fingers crossed you won’t have to deal with it as much as I did. But it is never too early to be ready.

I was not a fan of giving Behr anything other than me for meal time, but I realized that a nipple shield

was worth it to allow him to eat successfully. Due to the pressure, I was basically water boarding Behr during each feeding in those early weeks. He was drinking out of a fire hose, and as a result, not getting much milk down to his belly. Once he was strong enough, he transitioned off the nipple shield just fine. 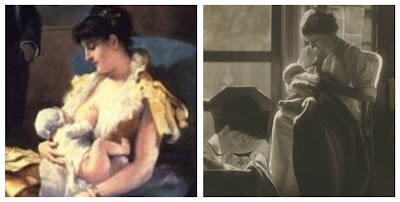 Are you going back to work? Think about your nursing goals as you look for child care. I knew I would be leaving Behr with a nanny at home for the first bit until we got into day care. So I investing in a double electric pump and began stocking my freezer early. Having a supply of milk reduced the stress on me to pump enough each day for the very next day. I knew he would not go hungry. Another factor was in choosing our daycare, the opportunity for me to visit and nurse Behr during my work day, made the day care located on sight even more appealing. Update: We get in starting September 1, easing my production worries! We are so excited!
While some mothers find breastfeeding an incredibly bonding time. It is OKAY if you don’t have the same overwhelming emotions of joy. I am a generally impatient person, so Behr’s 45 minute feeding sessions drove me mad. I began picking a good TV show or answering email on my blackberry to keep myself from cutting him short. Do we enjoy the bond? Sometimes yes, but other times for me it feels like a sacrifice I am willing to make because I believe strongly in the health benefits.

Make nighttime feeding easier. I quickly learned the side lying position which meant I could doze a bit while Behr fed. This was a life saver in the middle of the night.

Eat fruit and drink lots of water. Breastfeeding makes me dehydrated and often leaves me feeling lightheaded or dizzy. Having a natural sugar from fruit and plenty of water helps. When I pump at work, I often chow on a granola bar as I walk back to my office. Just be sure to listen to your body.

Boost your production. I drink more water than ever before, take fenugreek

tea. It is hard to tell if any of these things specifically boost my milk production, but I feel like they are working, so I stick with it.

Find a schedule that works for you. Will you have parent directed feedings, or will your baby decide his or her own nursing schedule. Do what works for you. For us, Behr fed on demand, which was a pretty consistent 3-4 hour cycle. But when I was home on maternity leave, I felt it was important to allow him to eat more often when he needed to. Eventually, this led to me reducing the crying fits and becoming better attuned to his growth spurts. We follow the “EASY” method

– Eat, Activity, Sleep, Yourself. Behr eats when he wakes up from naps rather than as he goes down for a nap. This works for us. Find what works for you.

Continuing to breastfeed while I work has been a bit of a challenge. I pump twice a day at work and then once at home between 11pm and midnight based on when Behr last ate. He sleeps from 7/8-2/3 now, so I can stay up and pump to make sure I have enough for his two 6ounce bottles the next day. Somewhere around the beginning of month 5 I realized I wasn’t pumping enough and my freezer stock of over 100 ounces was severely depleted. This schedule means I don’t get much sleep. And I think the lack of sleep might be leading to why I am not getting a good pumping session in at night. It is a vicious cycle.

A bit about exclusively breastfeeding. Going strong for six months was a goal of mine. We did introduce small sips of water because it has been a boiling hot summer and Behr sweats…like a grown man. I was worried about his hydration, so when we are out and about he gets a bit of water between feedings. We also introduced a few ounces of prune juice during times when he goes over five days without a BM. This kid does not like to poop. His record is 9 days! Both of these were after the 4.5 month mark. But we did not introduce any solid food until 6 months. So that is why I say we exclusively breastfed, although I know some die hards would object to this claim.

Do you still have questions? I feel like I haven’t even come close to doing this topic justice. Feel free to leave a comment or drop me an email and I would be happy to share more of what has worked for us.
Huge thanks for all of the email questions I got about nursing from friends and bloggers. You have helped me formulate the material for this post, and I likely would have found it too daunting a subject without my hundreds of emails with all of you. You ladies are amazing!
﻿﻿﻿

﻿all pictures from pinterest search: "breastfeeding"
because I really didn't feel it necessary to put my own boobs on the internet.
﻿﻿
on 9.8.11