I won't regret slowing down.

Before the french press finished brewing, Behr approached his breakfast with a familiar line of questioning. Disregarding the hundreds of times he has eaten this breakfast before, he asked, "What's in it." After each ingredient listed, he responded with, "okay, and what else?" He has incredible stamina in his questioning. I exhaled, "That's it. That is all the ingredients. No more questions until you finish your breakfast."

With a straight face, and sincere curiosity Behr asked, "Do elephants take baths?"

My left eye began to twitch. Are you kidding me? Where does this kid come up with this stuff? Seriously! That, of all things, is the question that spontaneously popped into his head that so desperately needed answering? And then I realized how much fun I have talking about animals with Behr.

I got down on all fours and waddled towards Behr, lifting my right arm as though it were a long elephant trunk, slurping loudly the water from the pond in front of me, then swinging my arm behind, I sprayed my back as elephants do.

With wide eyes he crawled into my lap as I explained, hoping to be accurate, that elephants use their trunks to give themselves a bath, just as I poured water from a cup over Behr's head when he is in the bath. We then debated whether or not elephants could swim, the depths of water they waded in, and if they went in water deeper than they were tall if drowning was a possibility.

Our elephant questions have resurfaced occasionally over the weeks since. And I can only imagine years from now, Behr racing home from school with a book that either proves me to be the smartest mom in the world, or sorely ill-informed on the subject of elephant hygiene. Either way, I am certain that I will never regret slowing down and having the seemingly mundane conversations that sprout from incessant questioning. 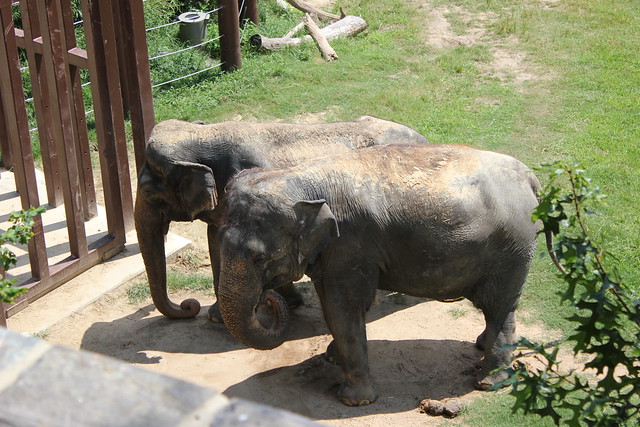 This picture was taken at the National Zoo in 2012, shortly after the elephant house opened. We are sorely over due for a return trip.
on 13.6.14