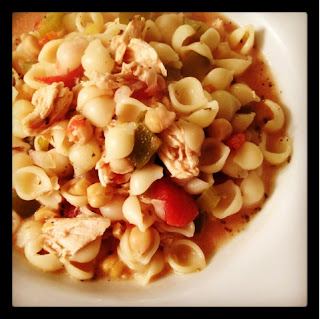 When I posted this photo on instagram, I claimed that it is a meal the whole family enjoys! And the request for the recipe began flooding in. Let's just say that meal time can be a challenge and recently we have been struggling. Making separate food for Behr is no longer an option, because he only wants to eat what we are eating. So I have begun a new adventure of transforming recipes to be Behr friendly. It is so exciting to join Lauren of With Two Cats for  Mini Meals and hopefully bring smiles all around the table.


Original Recipe via Pioneer Woman tweaked to be whole family friendly in our household
The main changes:
I omitted the jalapeno to reduce the intensity of the flavor
Replaced the fryer chicken with chicken breasts (because I don't know what a fryer chicken is, gasp!)
And added a can of cannelloni beans, because Behr loves them.


Directions: reworked to use less pots! My kitchen is far too small for the original directions.

Cook pasta according to package directions, being sure not to overcook it. Drain and rinse in cold water to cool. Toss in 1 tablespoon olive oil and set aside in a separate bowl. (see note below)

Place chicken in the pasta pot and cover in chicken stock. Bring to a boil, then simmer chicken, covered, for 30 minutes. Turn off heat and leave covered for 30 minutes. Remove chicken from pot and shred meat.

Heat a large dutch oven over medium high heat. Add olive oil and oregano and turn off heat, stirring over the next minute to keep oregano from burning. Set this aside in a small prep bowl.

In the oregano pot, saute onion, green pepper, celery, and cannelloni beans in 1 tablespoon olive oil over medium heat until tender and golden brown, about 10 minutes. Season with salt and pepper. Add chicken broth, shredded chicken, and tomatoes with their juice. Bring to a boil, then reduce to a simmer. Add cream. Finish by stirring in the oregano and olive oil

Note: This recipe made 3+ dinners for our little family of three, so I left the pasta to the side. When I reheated each evening's serving, I added in the pasta to keep from getting soggy. This recipe also freezes well, pre-pasta. 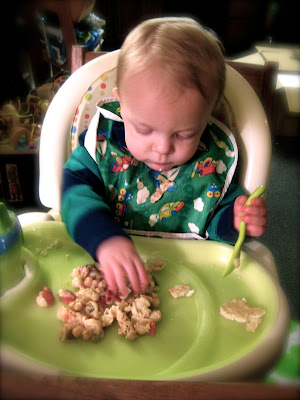 Once I put the food on Behr's tray,
I couldn't keep him still long enough to get a good picture.
Whole Family Italian Soup was gone in a matter of minutes!
on 15.2.12