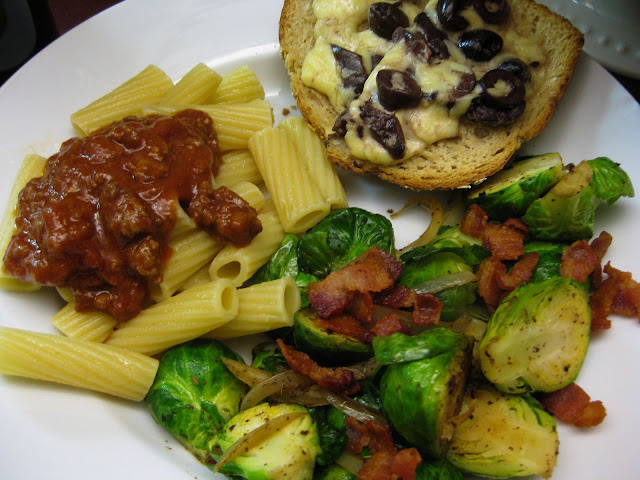 This is not always what last minute looks like.
This is what we call impromptu success.
Since Thanksgiving, our refrigerator has been a mishmash of leftovers and food that was purchased on a whim, far from the structure of meal planning. I started with the brussels sprouts, the CSA item that inspired this entire meal. While there are many nights that we make a meal of a veggie dish, that is never the case with brussels sprouts. They need an accompaniment.
The Brussels Sprouts:
After rooting around, I remembered a page I had torn from an old cooking light magazine, in preparation for this very day. Actually, I was lucky that this crumpled page hadn't found its way into the recycle bin yet...
My Ingredients:
6 slices of bacon, chopped (more than originally called for)
1/4 teaspoon dried thyme
1/2 cups sliced onion (less than originally called for)
1/3 cup vegetable broth
1 pound brussels sprouts, trimmed and halved

My Prep:
Heat skillet over medium-high heat.
Cook bacon until crisp, stirring frequently.
Remove bacon from pan with a slotted spoon; drain.
Add thyme and onion to pan; sauté until onion begins to be translucent.
Add broth to deglaze the pan.
Add Brussels sprouts.
Sprinkle with bacon.
Cover and simmer 6 minutes or until crisp-tender, stirring occasionally.

Folks, this part was easy peasy. I make homemade spaghetti sauce from scratch and freeze in small batches.  So I had everything for this on hand. There isn't really a recipe to follow because I make my sauce a bit different each time, depending on what I have on hand. For the rigatoni, I followed the box and I buy what is on sale.

The Bread:
Pasta meals are not complete without the bread. And for this meal I went all out (aka tried to use up as many of the lingering ingredients my fridge could spare). I turned to Pioneer Woman for her Cheesy Olive Bread.

Oh man, I did not do this recipe justice at all.  I used the ends of two loafs of bread, which Mark won't use. a scoop of mayo to finish off the jar, and tried to adjust the rest of ingredients to this highly inaccurate measurement.  I never have black or green olives on hand, but I love kalamata which I substituted in. And I omitted the green onions because, well, I didn't have any. Oh and my cheese of choice was gouda, you guessed it, because I had half a wedge to use up.

We washed it down with this malbec, because screw-cap wines can be just as good as corked.

At the end of the night, we thoroughly enjoyed our meal, the refrigerator was significantly less crowded. Hip, hip, hooray for unplanned cooking that turns out well.
on 6.12.11