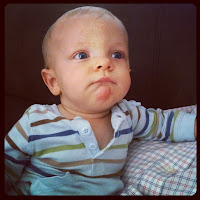 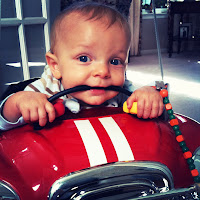 Lots has been happening around the Schreiber house.  Most notably, Behr marked 9 months last week.  Since our last update, there have been several notable milestones:


+ first tooth...and he has become a biter
+ first word...MamamamaaaaaMA with hands reached out to me.
+ improved transportation...folks, we have a spinner and a roller!
Less notable milestones include:
Feeding time: Behr has learned that he can spit, throw, and drop food.  All three are attempted daily.  We can't quite tell when he does or doesn't like food, because it has become a bit of play time.  But he loves finger foods and feeds himself well.  We are still spoon feeding purees to ensure he gets enough substance. But overall, meals have become a highlight of our day.
Play time: He loves to dance, shake his booty bottom, and head bangs.  He also has learned to catch and throw.  Loves stacking blocks and knocking them down.  Behr is warming up to the idea of being on his stomach, but still shows no signs of crawling.  Behr has mastered the art of finding all things not baby proof.  He pulls and tugs at things I never would have noticed if not for his curious fingers.
Family time: He looks for Mark and me when one of us isn't there.  This past week, while Mark was at grad school Behr would look to his side of the bed and pat it and then look at me with confusion.  If he sees me jet by, Behr will crane his neck to make sure he can follow my movements around the apartment.  He is a bit of a nosey little guy, always wanted to know what is going on and be sure to have both of us in sight at all times.

Cuddle time: Behr pulls up on us.  He holds on to anything he can grasp, especially if he things we are about to put him down.  And still loves to sleep in our arms.  Behr nuzzles his little head into our necks.  This will never get old.