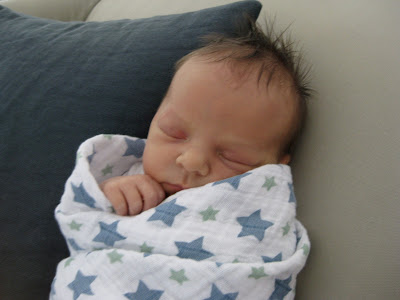 Thursday, January 13th:
Today ended up being the day of surgeries for Behr. First was his circumcision (and boy was that tough to send him off to) and second was his tongue tie.

When the doctor picked up our son for the circumcision, I said to Behr as he was getting wheeled away, “I’m praying for you”, the doctor then whit fully replied, “don’t just pray for him because he is going with me, pray for him every day!”

You could hear Behr letting the doctors know what he thought of the surgery, I cringed and couldn’t wait to get him back in our arms. A few hours after the circumcision, came the need for the tongue tie surgery, this time the doctors needed me to hold him for the procedure.

As we entered the surgery room, Behr let out a yell. Can you blame him? The poor boy was just in there a few hours ago and I bet he remembered what happened earlier!

Before the doctors did the tongue procedure he wanted to get a couple pictures in which I ok’ed, after all this is a teaching hospital. However in order to get the pictures they needed Behr to open his mouth wide. Since Behr had calmed down from entering the OR, the doctors decided to unwrap his cozy burrito blanket wrap – well this definitely made him cry again. After a couple attempts of pictures the doctors were still trying to get a few more shots and then out of the blue I spoke up and said that’s enough.

Instantly the doctors listened and we wrapped Behr up to comfort him. It was a new realization of power for me in which the doctors responded with respect.

For the procedure I had to hold Behr on my lap, keeping his head still. The doctors numbed the area and then basically snipped as needed. Although it was quick, holding my son felt like an eternity as I didn’t want to slip or move him and cause unnecessary harm to our boy. Needless to say we all continued to rest up although only an hour here and there.

Friday, January 14th:
In an effort to convince the doctors we were ready to go home, Shannon would hop out of bed and walk around every time she heard a familiar doctor's voice outside our door.  As Shannon rested up, paced the halls, she continued to regain her strength and energy in hopes that she could leave the hospital by tomorrow. But before that happened we shared in a day of more visitors, as well as, wait…I still need to pack for Brazil!

Karlene’s arrival today from Boston was instrumental in helping me get packed so that I could spend more time with Behr and Shannon. Oh and Karlene made sure that I ate food too. For some reason, when I was at the hospital I was only eating one or two meals a day, perhaps it was the stress of leaving town so quickly and wanting to maximize time with family or it was the unknown of what the next week entailed. Regardless, I was thankful that we had a friend like Karlene to spend time with Shannon right away. 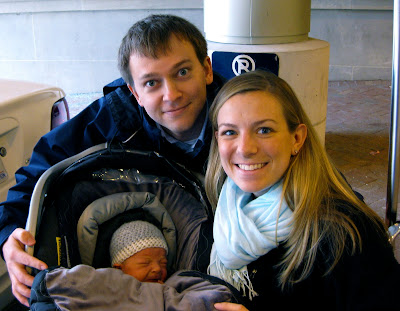 Saturday, January 15th:
Time to go home, then CVS, then home, wait – now it is time to go to the airport… That was basically how quick my day flew by. Below are the following highlights that I will never forget about this day…
- Leaving the hospital thinking, “wait they are really going to let us take a baby home”.
- My new found defensive driving abilities with baby on board.
- Bringing my family home for the first time.
- Getting choked up walking down the hall leaving the apartment for my trip.
- Thanking God for the gift of life and the safety of my wife and son.

Most significant for Shannon was probably leaving the hospital. As we pulled away from Georgetown, with a new bundle in the back seat of our car, turning to look at him every few seconds a song began to play on the radio.  This song by Sidewalk Prophets has become Shannon's song for Behr.


In the craziness that we felt at the time, we can’t help but be even more grateful of the service and sacrifice of our men and women in the armed forces. As hundreds of fathers are unable to be home for the birth of their babies, we can’t help but gain a more positive perspective of how thankful we were that I could be home for the birth of my son before having to travel. As difficult as it was to leave and as long as that following week felt, I can’t help but remember the joy it was to come home and see my family. May our prayers always be with the parents of these newborns who’s unselfish service for our freedom require for them to miss some of life’s greatest and emotional moments.

It has been a joy to write the birth story of our son for you, but mostly to capture the memory for my family.  Thanks for reading.  - Mark
on 21.9.11