Interpretation: Ski Trip 2008 – Deep Creek Lake, MD – Wisp Mountain (hill)
Never in my life did I imagine that a Western Maryland ski vacation could be so much fun. Nor did I anticipate that teaching Mark to ski would bring so many highlights. We woke up the first morning to a fresh snow fall and Mark declared he was amped to shred some mountain and ski through powder. While we aren’t sure if one actually shreds a mountain, we were certain that a few inches of fresh snow would NOT be skiing through powder. Nevertheless a few inches of snow was much better than the forecasted wintery mix. We headed to the mountain (hill) with high hopes.
Mark started the day like any new skier, figuring out to put on those crazy boots and learning to ride the lift. With the vote of the group, we shuffled Mark past the bunny slopes and pushed him towards his first run of the day, a green. Mark made it down the mountain successfully with only a fall here and there when his back ski would get caught. By lunch he had mastered the greens and Kami and I tricked him into a blue run. Following lunch, we continued to hit the blues for the rest of the afternoon. Mark was a Champ! The day was a huge success, Mark decided he would ski again (next year – ST09) and we celebrated with a big lasagna meal back at the house.
The next day of our trip, although another night snowfall coated the ground, it was treacherously cold and we were all sore from the slopes. We opted to stay indoors, in our beautiful mountain lodge, and spend the day improving our other skills: Wii Sports, American Idol Karaoke, and Guitar Hero. Amidst the video games we also found time to read some good books, play a game of scrabble (which Phil won), and relax our tired muscles.
This only begins to explain the non-stop laughs and stories that emerged from this weekend. Here are a few of the photos, including a group shot. 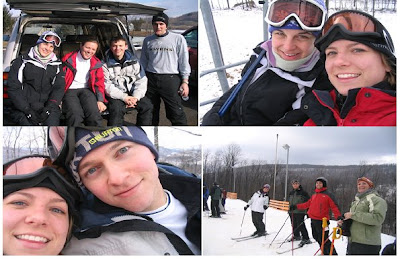 Schreibers and Wagners eating lunch at the car, Kami and me on the ski lift, Mark and me on the lift, Karin, Phil, Matt, and Katie waiting at the bottom of a run. 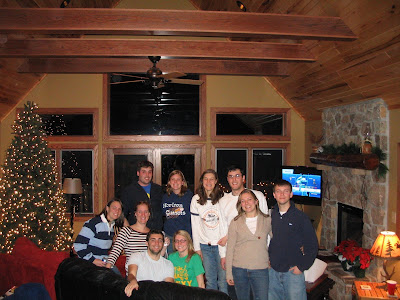