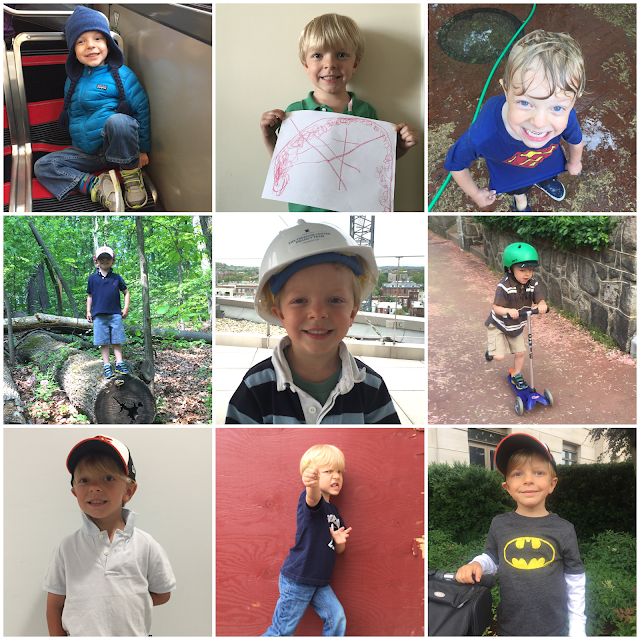 Its hard to believe that Behr is already four and a half. This spring and summer have made me realize how hard it is to slow down and savor these moments. But the crazy is also just as fun. Behr and Hudson are at a great age of wresting and playing together, but what strikes me most is the conversations we have these days. If you were to spend an afternoon with Behr, you would likely hear him...

...count to a hundred at least twice and skip count by hundreds to one thousand. It has become such a frequent pastime, that I have joked that there are too many numbers between 1 and 100.

...say he will do that when he is older, like 100. When he is 100 he will have to shave his face, get his drivers license and after that his keys, have a girl friend, and wear boxers. He has quite a few milestones to hit when he reaches 100 years of age.

...talk to you about the Seattle Seahawks. Much to my disdain, he has abandoned the Philadelphia Eagles to call a different team his favorite. Behr will tell you he switched because the Eagles are loosers (he used to say lossers) and the Seahawks are winners. I will tell you it is the result of peer pressure from one of his older friends, an avid Seahawk fan.

...talk about his dog. He doesn't have one yet, but he is planning all the details.

...correct your or catch you in a contradiction. Behr hangs on each detail someone gives him and when they don't make perfect sense he is not afraid to call you out.

...tell you he can read. His goal this past year was to learn to read. He has spent months working hard at it and now can read quite a few sight words and word families. Just wait until next summer. I hope his love for reading continues!

...count to 100 at least one more time. It is after all, his favorite way to pass the time.

Past Convos with Behr
#convoswithBehr
on 14.9.15