Welcome back to Football Fridays! Where you find game insights, spectator coaching, and recipes to make the fall season more than just "man time."

Games This Week: no byes, every team plays

Sunday: New York Football Giants vs. Tampa Bay Buccaneers - Since reigning Superbowl champs (the Giants) lost their opening game to the Dallas Cowboys, they need to win and win big on Sunday to save face.

Sunday: Philadelphia Eagles vs. Baltimore Ravens - the battle of the birds may only be a big game in my household. Both teams have historically been at the top of their conferences and have strong defences. But unless Michael Vick (Eagles QB) stops throwing interceptions, the Ravens could stomp all over Philadelphia.

Sunday Night: Detroit Lions vs. San Francisco 49s - neither team has been a powerhouse for the past several years, but they have had steady improvements and either could be a breakout team this season. This game will set the tone for where they go next!

The NFL referees are on strike - commentators are referring to the new refs as "The Replacements." If the men in your life are upset about the call...make a smart comment about where these refs came from such as. "Have they ever seen a football game before?" or "Even I could have made that call!"

Penalties were rampant last week. If the flag continues to get thrown a lot, your one line zinger: "These guys get paid too much to make this many mistakes" or "This isn't the off-season anymore fellas, time to quit being lazy and get back in shape!"

I have posted this recipe a hundred times, but Kentucky-style Pulled BBQ Chicken is such a weekend staple in our house. You have to try it out! 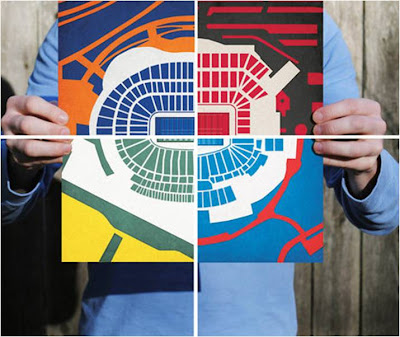 I won't always have a gift suggestion, but odds are, if you are reading this post, you might be looking for a football oriented gift in your future. This morning I came across a Fab.com sale on NFL stadium prints. I know of at least three men who will be getting these for Christmas. For $29, you can't beat this 12x12 print. It is a great price point and perfect for any football fan in your life! Go to Fab.com to see your own hometown stadium. note: this is a limited time sale site.


Enjoy your weekend and happy football watching!
on 14.9.12