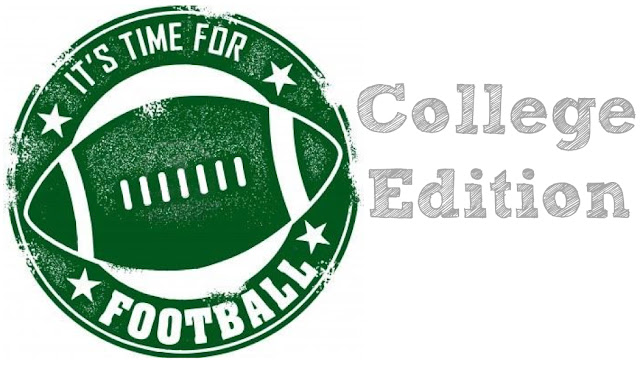 We a mixing Football Fridays up a bit this week with a look at college football. Jill is here from My Meek Life to share what she knows about her favorite game. I am so happy to have her, and I think you will be too!

Thanks, Shannon for letting me post today. This is fun! Disclaimer: I'm no expert. But I do love the game! Growing up in a college town with zero pro teams around, the University Is. Who. You. Cheer For. If you can relate, live near a great college team, or just have lots of school spirit, this post is for you! For those of you less familiar with putting all of your eggs of happiness into one basket carried by a team of 18-22 year old guys... welcome to the madness.

Note: College Football fans are obsessed over rankings, because usually if you're ranked No. 1 and No. 2 at the end of the season, you play for the National Championship. Other high ranking teams may play in another big "Bowl Game." (The controversy is that computers and polls rank the teams, and the system can seem unfair.) Last year's champion and runner up (Alabama and LSU) are out in front again, and the rest are looking to prove themselves as worthy contenders. During the first three weeks of play, we're learning who's worth their salt in this race... and who's already out of gas. This Saturday, look for a few of these teams to pull ahead.


ACC: Clemson @ Florida State
Florida State is having a moment, shutting out Wake Forest last week 52-0, but they need to watch their backs against the Clemson Tigers, who won the match up last year, during a rough patch for the Seminoles. Will the FSU defense stay strong to overpower the Tiger offense?  Who will prove to be the leader of the ACC?

Big 12: Kansas State @ Oklahoma
Oklahoma traditionally has a strong team and has been quietly striding through their first few games this year. I expect them to win and maybe hit that No. 3 spot in the rankings. If they don't just win, but win big, they may be seen as the biggest competition for the No. 1 ranked Crimson Tide.

Big 10: Michigan @ Notre Dame
Michigan lost their season opener to Alabama by more than expected and the Air Force gave them a run for their money the next week. Meanwhile, Notre Dame wasn't expected to be great this year, but surprised Michigan State fans with their win last week. So this game is kind of a wild card. I'm rooting for the Fighting Irish to continue to shake things up.

"Alabama is in a class all their own. Is there any way they could be knocked out of the No. 1 spot this year?" The past 6 National Champions have been SEC teams, and they are making their case for this year too.

Make your picks for Saturday winners and statement makers. Remember, Florida State and Oklahoma have been stomping opponents, but this week will be the first BIG game for each. Stanford and Notre Dame are also undefeated, each pulling off an upset last week. How long can they keep up it up? (Stanford has it easier this week.)

Pull up this video. My poor little Razorbacks have become a MAJOR laughing stock this year after extremely high expectations. Lots of scandal. Its such a mess.

Since we're mixing it up this week on Football Friday, I'll turn from savory to sweet in the food section. Actually, these Peanut Butter Pretzel Bites*  are sweet and salty and peanut butter-y, and creamy and crunchy rolled (and frozen and dipped) into one! I found this recipe on Pinterest (where else?) so all credit goes to the site I've linked to. *college football connection: minus the pretzels, these are pretty much buckeyes, a tasty treat AND the Ohio State mascot.
on 21.9.12