Welcome to Football Fridays! Here you will find everything you need to know to make your football filled weekend a huge success. I will give you info on the big games, a few clutch comments to add to the banter and even a recipe to make you every one's favorite host.

College football is generally on Saturdays. Admittedly, I grew up in Philadelphia, where college football basically doesn't exist, so I am still learning about this whole new world. So these posts will generally be about the NFL. However, I would love for you to help me out in the comment section and share your college football genius with me!

NFL games are usually played, Thursday night, all day Sunday, and Monday night. However, the NFL season started this past Wednesday with the Cowboys at the NY Football Giants - this was a big game. See talking points for more info.

Games This Week: every team plays this week

Sunday: Philadelphia Eagles at Cleavland Browns - The Eagles are once again trying to prove they are actually a good football team. Although they have had winning records for the past several years, they haven't won a Superbowl since 1960. Yeah, its been a while.

Sunday Night: The Pittsburgh Steelers at the Denver Broncos - Pittsburgh quarterback Ben Roethlisberger is younger than Peyton Manning and has more Superbowl Rings. Peyton is still trying to prove he is one of the best quarterbacks in the NFL (despite his injuries). Denver really wants to win this game!

Monday Night: The Cincinnati Bengals at the Baltimore Ravens - The Ravens typically have one of the strongest defences in the NFL. The Bengals have been an erratic team over the past few years, some weeks they are good, other weeks they aren't. Baltimore should dominate this game.

Monday Night, Game 2: San Diego Chargers at the Oakland Raiders. Other than being a California battle, this isn't a very big game.

Remember how I said the first game was already played? Well the Superbowl Champ NY Football Giants lost to the Cowboys. The Superbowl champs hardly ever lose their first game of the following season. So you can say..."Can you believe the Giants lost to the Cowboys?" And if you want to take it a step further: "That totally shakes up the NFL East (their division) in week one!"

"How do you think Payton Manning will do on a new team? He has been a Colt for so long, can he ever really become a Denver Bronco?" and "Payton is so new to Denver, can he even consider this home field advantage?"

The NFL referees are on strike. So if the men in your life are upset about the call...make a smart comment about where these refs came from such as. "Have they ever seen a football game before?" or "Even I could have made that call!" 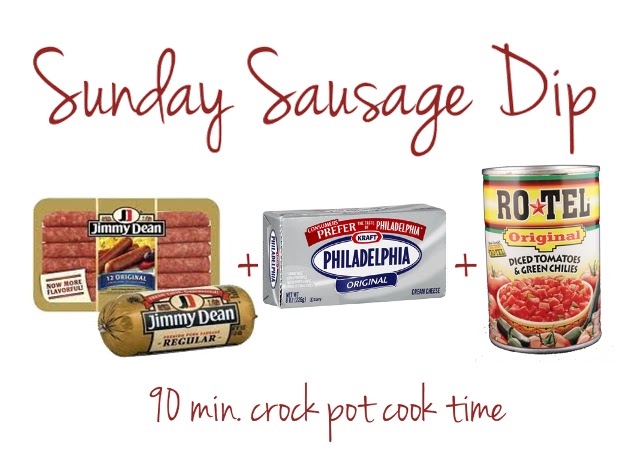 This is one of my favorite football snack foods. My friend Christie first introduced this recipe to me a few years ago. There are a quite a few variations swirling around the internet, it is just that good.

Ingredients:
1lb. breakfast sausage - or hot for an extra kick - browned and drained. (I think the log is easier than the links, but both work just fine)
8oz. package of cream cheese
16oz. can of rotel (or other brand of tomato and green chilies)

The sausage can be browned the morning of the game, or even the day before. About 60 minutes to game time, toss all three ingredients into a crock pot and cook on low for 90 minutes. You can always speed up the cook time by increasing the heat setting. I use my 3 qt. crock pot for this recipe. It can easily be doubled or halved to suit the crowd.

Serve with chunks of bread or your favorite tortilla chips.


Enjoy your weekend and happy football watching!
on 7.9.12