Behr seriously loves spinach...when it is in a quesadilla. In fact, he will eat most food when it is easy for him to pick up and fun shaped. (we consider triangles fun shapes in this house!) Once a week or so, I dedicate time to making a big batch of quesadillas to serve as a quick meal when he Behr needs to be fed stat. We have a short window when we get home around 6:00 and bedtime between 7:30 and 8:00, especially on bath nights.

So here is the drill that has been working for us:

I get a package of 10 tortillas and begin to shred cheese. I like finishing things, so this is typically a mix of whatever is open. All the while, I have a box of frozen chopped spinach cooking on the stove top. I also tend to throw in other left overs like this chicken from my tacos. The first batch of quesadillas takes the longest to cook, so I tend to prep the rest of the tortillas with filling, fold them over and stack them on the cutting board. By the time we get to the end, they cook much faster. (professional mommas, am I simply not letting the pan heat long enough?) After they cooked, I lay the quesadillas on the cutting board and let them cool before cutting. All of the cooled, cut, triangle quesadillas go in a container for easy access all week. The trick to making these work, is to understuff. I put far less filling in Behr's quesadillas than I would if I were making them for adults. 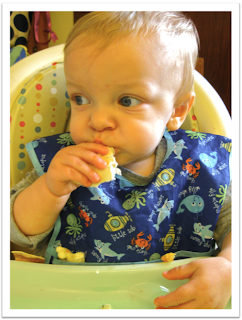 If Behr is in the room, it is a mad dash to get some ready for him to eat...immediately! He loves these so much, he goes bonkers when he sees me start to prep! I couldn't get a single picture of the quesadillas on his tray before he went at 'em like a banchee. Oh, and see that casualy quesadilla under his elbow? That was stufffed with chicken. He's no fool, he wanted his green veggies. What can I say? My kid loves spinach.