I am a huge fan of all things blue and turqouise, but this appliance set takes the cake! 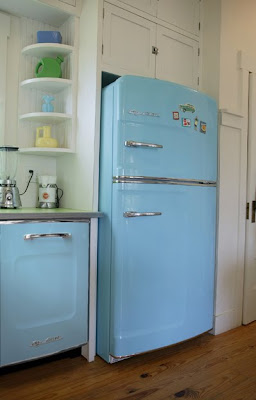 {image}
Isn't it fantastic?! I think my love for retro began with my Yia-Yia and Popouli. Their basement has an old school General Electric fridge that is still running! A friend of the family contacted GE and it may be the oldest known model that is still in working condition. Aside from that cool factor was the bonus of the contents.
Before we visited my Popouli would always pick up some Stewart's Root Beer in their iconic brown bottle with an orange label. It was our little tradition. I would run in his house and give him a huge hug. Next, he would send me to grab something random for Yia-yia out of the basement fridge for him. This was his secret code for "Stewart's." I eventually caught on, but the magic never faded and no matter how old I got, he continued to stock the fridge with Stewart't Root Beer, just for me. As a child it never occurred to me that he was doing this for my other three siblings too...!
on 12.8.10