Are you Ready for Some Football?

Its football season. The weekend will be rainy. An Autumn chill has now entered the air. Mama Schreiber's Chili recipe has been pulled out and is now officially plastered to the Fridge where is will remain until January/February. What better way to spend this weekend than watching some football?

Here are the games I am excited to watch this weekend: 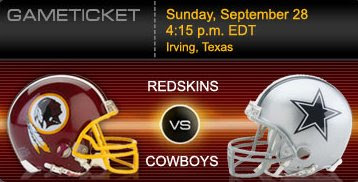 The Redskins travel to Dallas this weekend for a huge NFC East game. I am rooting for the Redskins, the 11.5 point underdogs. I think the Skins have been strong a causing turnovers this season, something that they have not traditionally done well. This will give them good opporunities against Tony Romo and T.O. who tend to give them up. Hopefully the skins will take advantage of these oppotunities and knock the Cowboys (3-0) off their winning streak. Aside from cheering for Coach Zorn, I also really don't like the Cowboys so cheering for the Red Skins will be easy this week.

The big game this weekend is the Eagles on Sunday night. If the Eagles are able to play their deffensive game they way they did last week against the Steelers, this should be a good game for Philadelphia. The Bears have had some close losses and are probably itching for the win so the Eagles need to stay on their feet and play smart. McNabb shouldn't have a problem making solid plays against this team.

I hope you enjoy some good football this weekend. Do you have a favorite team? Or do you get more excited for quality football eats? What are your favorite fall recipes?
on 26.9.08