A week in Pennsylvania, by the iPhone

We arrived late Friday night to get ready for Behr's birthday party. It was an airplane theme, complete with airplane shaped grill cheese, two cakes, and lots of red and blue accents. Behr's first cake didn't go quite as planned, but that is a story for another day!

The main feature of the party was a moon bounce, inside! I once wrote a post about how Angelos family parties are always over the top, but an indoor moon bounce may take the cake. The best part was, my incredibly generous friend Faith owns it and lent it to us for the party. It is a toddler moon bounce, so slightly smaller than your average. You can get an idea of the scale from the first picture. We had eight kids under the age of 5 and they all played very well together. Friends drove from all over Pennsylvania and Maryland, and we were so grateful to have everyone together!

Some of the boys of the party. The first picture is of Behr, taken and uploaded to instagram by my 4 year old cousin Liam. That boy is a wiz with the iPhone! In the middle we have Levi {you may recognize him as Julie's son}, the sweetest boy. He was so excited about the piano! And on the right we have Noah. He is a the best big brother and was very helpful when it was time to open pressents. His momma, Faith, is expecting number three, and I am certain Noah will be a big help! 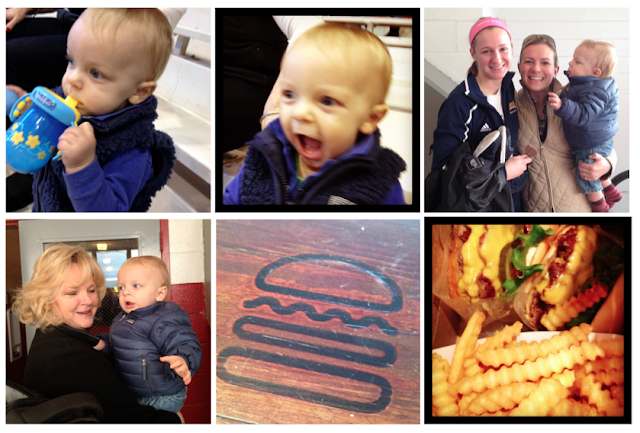 On Sunday, we hopped in the car and drove to Fairfield, CT to watch Brookie play basketball. We were all so excited to see her! Behr loved watching the game, and kept an eye on the ball with intensity. He even raised his hands up in the air or hollered at the right times. He is clearly his momma's son. On the way home, we completely accidentally found a shake shack, on our way to a five guys. And I must say, my first experience with this burger join was pure perfection. Why have I never been to the one in DC?

Monday, we had brunch with Auntie Karlene who was only in town for a few hours! Julie and Levi joined us too! Karlene was kind enough to get Behr a drum set

for his birthday. And now everyone who sees it laughs and smirks about how Karlene, "did that on purpose!" We will be laughing about this gift for a long time. The morning was a time of sweet fellowship and the boys played very well together.

The rest of our week was a lot of time around the house, or sleeping in the car on our way to visit more friends and family. We learned how to sweep the floor, implemented the cage

, and even found some old toys in the basement to keep us occupied.

I was once again reminded by the luxuries of suburbia. We met up with Mark's cousin Rebecca and her son Sam at a Barnes and Noble that had a story time area, train table, and lego table! It was like an indoor activity center for kids. Why doesn't the city have book stores like this? At the train table, the big attraction were the kid sized adirondack chairs. Over at the lego table, Behr had more fun knocking things down off shelves while Sam built towers. It was a great time catching up with family! 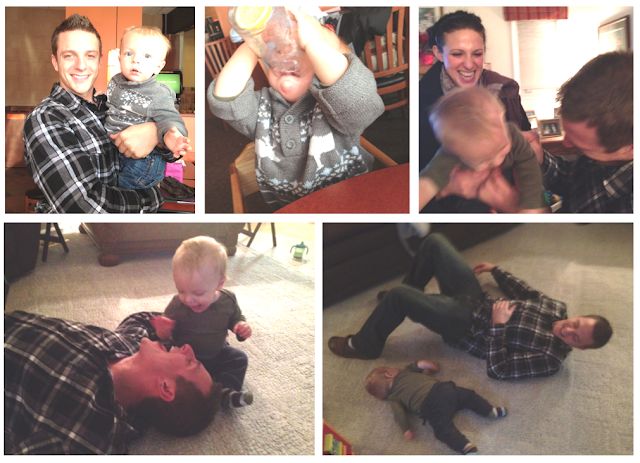 Last but not least, we had a blast with Aunt Julia and Uncle Mike. Behr has some new favorite people in his life. No one makes him smile like Julia or laugh like Mike, they even tucker him out. He is one well loved little dude.

And finally, on Saturday, reuniting with Daddy after his final residency in grad school. We cannot wait for graduation in May!
on 23.1.12