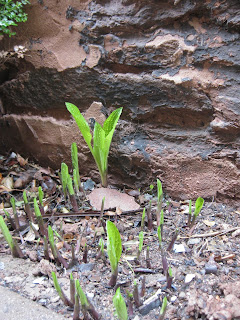 This time last year, I was itching for Spring. It had rained a lot, I was working long hours, and the winter had seemed to drag on. There should be no complaining since I had just moved from New England, but the promise of a Mid-Atlantic summer seemed as thought it would never come to fruition. And then it happened.
I found a mystery plant growing in a patch of dirt along the path to my door. Little shoots sprouting up holding promise of spring. But I could not for the life of me figure out what these plants were. They were too pretty to be weeds, but I certainly did not plant them. Nor did I expect that my landloard had planted them since the area around the house remained largely unkept. (it actually remains unkept for fear of disturbing my beautiful surprise!)
And then they bloomed, beautiful calla lilies. Some green and some white, they came out of no where. Well...now they are back, greeting me each afternoon as I walk home. Welcoming me to my apartment.
I love them. They are my first sign of Spring. 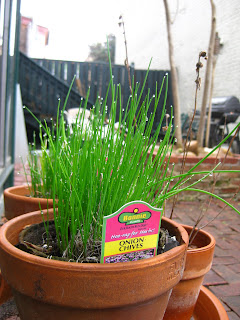 This past weekend was a bit rainy (to say the least) and it was the first time I really noticed that my Chives were growing back too! I planted them last summer and was so happy to have fresh herbs through the fall. But for some odd reason, it did not occur to me that they could come back. Well, they are sitting out back, looking beautiful, catching the rain drops. And in my own excitement, I am cooking every recipe I can think of that includes fresh chives! Sunday night was potato soup. Probably the last potato soup I will make until it gets cold again during football season. But boy did those chives taste good!
on 31.3.09